Great White Shark seeds is known to produce a fast-acting and reliably potent buds that are bright green with orange hairs and caked with resin. Great White Shark is a terrific strain to use for making edibles and concentrates due to its copious crystal production.

Great White Shark aka Peacemaker is a very decorated strain having won the High Times Cannabis Cup, High Life Hemp Fair, and Spanish Cannabis Cup. Great White Shark is one of the more recognizable and most photographed strains around thanks to its amazing structure and a frosty coating of resin. Originally bred by Greenhouse Seeds in the Netherlands, it remains a popular choice for experienced and novice growers. Great White Shark is the result of crossing Super Skunk with a South American Sativa and a South Indian Sativa creating a blend of 85% Sativa to 15% Indica. Despite the strong sativa genetic presence, Great White Shark grows more similar to an indica becoming a very bushy and round-shaped plant. The GWS is full of budding sites and can be a tremendous producer often reported to be the best yielder in Greenhouse’s White family line.

The Great White Shark strain is known to produce a fast-acting and reliably potent high with sweet, skunky and citral taste notes that linger on the tongue after smoking or vaping.

The buds are bright green with orange hairs and caked with resin. Great White Shark is a terrific strain to use for making edibles and concentrates due to its copious crystal production. The trim leaves are so THC laden that it would be wasteful to not use them for hash making or infusing. GWS’s THC content has been measured at 14%-18% and with an average CBD content of less than 1%. The effects are noticeably more indica feeling, which is well suited for medical users looking to lower stress, boost appetite and relieve muscle aches. Those living with PTSD have reported positive results using this strain to ease symptoms associated with it.

Great White Shark seeds grow quickly and are a breeze to clone. The plant loves its nutrients and has a fast metabolism which makes it less likely to feel stress from overfeeding. GWS is a heavy yielding plant with an average indoor harvest of 28oz/m2 indoors and 35oz/plant outdoors. The plant is ready to harvest indoors during the 8th week of flowering but to achieve the full resin production and cannabinoid profiles it’s recommended to let it go for 9 to 10 weeks. Outdoors, GWS will finish in early to mid October. Feminized Great White Shark seeds are a great choice for amateur and experienced growers alike. With so many new strains going in and out of fashion recently, Great White Shark has remained a popular choice for growers and patients seeking dependable high-quality cannabis flowers. 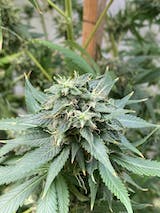 Shorter than most plants. But beautiful with loads of crystals. 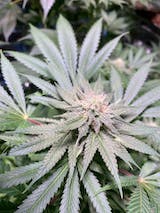 Had 8 of 8 germinate. Quick discreet shipping, very friendly and helpful, not sure how it could get much better than that. Oh yeah they also throw in freebies. I’ll definitely be back!

All healthy and growing like crazy! Hoping they give out a good amount for the first round.

All are growing super well! Wish I got more of the GWS!

1st growing these and not doing as well as expected. Will be a different story next year!

Best and grow I ever had