AK-47 strain is one of the most well-known cannabis varieties worldwide. The original strain was created by Serious Seeds in 1992 and is a cross of Columbian, Mexican, and Thai sativas with an Afghani indica. AK-47 is 65% sativa with enough indica to induce a relaxing effect that balances the rocket ship high. The boldly named AK-47 has won many awards, including 1st place for Hash at the Barcelona High Life Cup in 2005, 1st place Sativa at the Toronto Treating Yourself Expo in 2011 and, 3rd place Best Hybrid at the 2011 High Times Cannabis Cup. For years, AK-47 has been a go-to strain among serious cannabis enthusiasts.

AK-47 is high in the terpenes Caryophyllene Oxide, pinene, and caryophyllene with additional amounts of myrcene, humulene, B-pinene, limonene, and linalool. The terpenes of AK-47 have a sweet red berry flavor with a bit of pine and damp earth. AK-47 terpenes are ideal for relieving stress, improving your temper, and increasing appetite.

AK-47 has a strong piney and sweet skunky smell that wafts through the air. With earthy sandalwood and sour cherry aromas that tingle the nose, AK-47 is pungent and not very discreet when smoking in public. Smoking or vaping will produce powerful citrus, spicy and floral flavors. The coveted cherry phenotype of AK-47 has been used by many breeders to create new premium hybrids.

The cannabinoid profile is 19.5% THCa with .51%CBG and .15%CBD. Cannabigerol is believed to have similar effects as Cannabidiol. It has its properties that when paired with CBD and other cannabinoids works to interact with the body’s endocannabinoid system helping support overall balance.

Be prepared for a long-lasting rollercoaster effect after smoking AK. The strain is known to be a “one-hit wonder” with an intensely cerebral and engaging buzz. The high has a body relaxing and creative feeling that can also distort your short term memory. A great strain to help alleviate depression as well as being effective at reducing inner eye pressure.

AK-47 is an easy strain to grow. It has an 8-10 week flowering time for indoors or a greenhouse. Outdoors, AK finishes flowering in mid-October. The plants grow tall with spear-like branches and yield 14oz/m2 indoors and 14oz/plant outdoors. AK-47 has very few leaves and produces fat, dense clusters of substantial, crystal-covered colas during the flowering stage. Indoor and greenhouse growth are favorable where you have more control over humidity and temperature although, the strain emits a strong odor during growth. Outdoor Ak-47 plants are impressive, but can have problems with mold if the climate is too wet and without enough air circulation. AK-47 reacts well in hydroponic systems and often outproduces her soil-grown sisters. Feminized plants may require an extra week of flowering, and may grow shorter than non-feminized plants.

Tried 2 seeds. One survived to seedling. Now she is 7 weeks old and picking up speed. Anxious to see future results. Final evaluation pending. 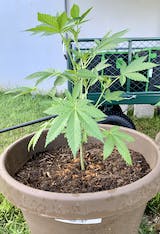 I ordered your ask 47 seeds and they all germinated. There all growing well inside my tent after six weeks there looking strong and healthy. I’ll let you know when I harvest in a few weeks 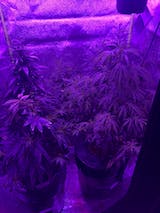 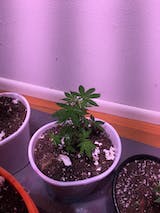 This AK-47 is growing so fast and looking amazing!! So happy with them!

well packaged. The best so far regarding how seeds were safely packed. Long trip to Australia. took 2.5 weeks. not unusual when distance considered. Will have to wait for winter solistice to activate seeds. That will test packaging quality waiting 5 more months.
Remember people, if you are growing indoors your personal, room,, and water hygiene must be totally perfect. Check water, wash hands, use clean grow medium, keep room totally clean. No tobacco, no bad quality grow medium. Be really careful. use gloves. Clean or brand new pots. Good luck. alsurfnut Zkittlez cannabis strain give users a relaxed and up uplifting high, with an almost euphoric glow that is super chill. With Zkittlez you can expect to function normally and go about your day with a smile on your face. Bubblegum Seeds Bubblegum is a popular cannabis strain with a multilayered scent and sativa dominant qualities. Bubblegum began in Indiana as a

These Auto Quarter Pounder Seeds are the result of a 2 year breeding program with exceptional Brazilian genetics, creating this very powerful strain that was