With a taste of dank pine needles and lemon iced tea, the effects of Trainwreck creep in like a thief in the night and hit you like a sledgehammer to the face. Having legendary origins, the strain Trainwreck is a wondrous marriage of some classic top-shelf California genetics. Originally bred in Northern California during the 1970s, Trainwreck is a sativa dominant hybrid blending Mexican and Thai sativas with an Afghani indica creating this all-star hybrid that is 40% indica to 60% sativa.

Although the parent strains of Trainwreck were already beloved staples in the Pacific Northwest, the Trainwreck strain we know today didn’t appear in grow circles until a series of chance events brought her into the world. As the story goes, one summer a train derailment occurred very close to the original Trainwreck grow/breeding site in Northern California. The worried farmers harvested everything early to avoid detection by emergency teams who were responding to the incident. Some of the plants were premature but one strain, in particular, the E-32 which later became known as Trainwreck stood out among the rest. Luckily the growers had saved cuttings of each plant before flowering and after testing all of the harvested plants, the E-32 was selected as the best in the crop and named Trainwreck because of the fluke train accident and also the intensely disorienting high that can make a novice smoker feel like they’ve been in an actual train wreck.

Characteristics of the Trainwreck strain

Trainwreck is a very potent strain with an average THC content of 15-24% and CBD ranging from .02-.1%. The high is fast-acting and truly mind-altering. Unexperienced smokers have reported feelings of nervousness, paranoia and dizziness after smoking but most experienced users love Trainwreck for her potent and stimulating, get-up-and-go high.

When finished flowering, the buds are popcorn shaped and have a lovely lime green color with bright orange hairs and are loaded with crystals. The smell is reminiscent of the famous Jack Herer strain with spicy and lemony notes. The smoke tastes piney and pungently earthy on the tongue and remains on the palate for a while after smoking. Once hailed as a great outdoor strain, Trainwreck can also be grown indoors with success. Flowering time for and indoor gardens is 8-10 weeks. Outdoors, Trainwreck finishes in late October to early November. She is a good producer with average yields around 18oz/m2 indoors, and 25oz+ per plant when grown outside. When growing in indoor gardens Trainwreck remains fairly short and not too branchy but outside it’s like a whole different plant and opens up in the full sunlight. Trainwreck is easy to grow if you are a first-time grower but, also a rewarding grow for more experienced gardeners. The plant is vigorous, resilient and a true joy to cultivate. For most of its history,

Trainwreck was only available in clone form but now this amazing strain can be started from seed and you can enjoy watching this beautiful plant produce its next-level buds.

Oder arrived in 3 days during Covid!!!! Three of the five seeds germinated after 10 to 14 days. Are now 6 weeks old and have been outside in buckets for the past 3 weeks. Peters 20-20-20 in low solution every time I water. All 3 are female with thick stems and are large healthy plants. Some of the nicest I’ve ever seen in 30 yrs of growing. Never thought I would pay $10 a seed For anything However if it finishes as nicely as it started I’ll gladly be a loyal customer. Thanks seed king. 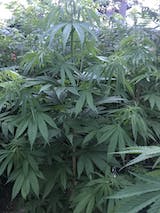 They not only arrived discretely in a short period, but literally the first seed I germinated within 2 weeks has a trunk on it almost as large as much larger plants I have grown. She’s gorgeous. 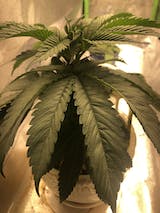 This Strain is fantastic if you like to smoke and focus on a project or a video game. No anxiety, memory recall is also positive. This plant more than doubled in size during flower. She’s tall and resilient. Buy it and enjoy!

That’s it on the left in the picture. Crushed my other strains in size.

Quite impressed so far as to how these seeds have grown. It's been 4 weeks since they started from seedlings and they have exceeded my expectations at this point.

G
G.R.
Best I ever purchased

Train Wreck is my favorite. The seeds sprouted easy and came right up. Very healthy plant about 2months old at this point

A
A.
Great result

They all came out healthy

All germinated no problem

All germinated and going strong.