MK Ultra is an indica-dominant strain that stands apart from the rest due to its powerful cerebral effects. MK Ultra’s aroma has been described as similar to burning plastic mixed with some lemon and diesel. The smoke of this strain is very smooth.

MK Ultra strain was first named after the methods of mental manipulation employed by the CIA’s Project MK Ultra. This indica-dominant strain stands apart due to its powerful cerebral effects. Even though the name may at first scare you a little, consuming MK Ultra will immediately explain the reasoning behind it having that name. MK Ultra is classified as one of the strongest hitting Indica hybrids in existence and brings on HIGHLY powerful and hypnotic cerebral effects. A cross between mostly-sativa hybrid OG Kush and indica G-13, this strain was first bred by T.H. Seeds and took home 1st place Indica at the High Times Cannabis Cup in 2003 and 2nd place in 2004.

MK Ultra’s aroma has been described as similar to burning plastic mixed with some lemon and diesel. You will find the aftertaste to be long lasting with a piney, earthy sweetness and a hint of mustiness. The smoke of this strain is very smooth.

MK Ultra is renowned for its ‘hypnotic’ effects and is best used when strong medication is necessary. Its hypnotic cerebral effects hit almost instantly. Smoking this strain causes your eyelids to become very heavy making MK Ultra perfect for patients suffering from insomnia. It induces a heavy couch lock, which makes it suitable to combat stress as well. Users often demonstrate signs of giddiness and carry an ever-present smile on their faces. Depression symptoms can also be alleviated with the help of this exceptional strain.

Lab test done on MK-Ultra have reported THC content of 18% and CBD levels of 0.1%.

MK Ultra is a highly effective medical marijuana strain for stress relief and anti-anxiety. Therefore the relaxing properties makes it perfect for evening and nighttime use.

Awesome genetics! 2 of 3 germinated, both female, great phenotypes for cloning. Most definitely will order genetics from Seed King from now on!

I germinated 5 seeds, 4 came up. Lost one, but the root was very small. Awesome looking plants. Can't wait to see how well they turn out. So far, I am impressed. 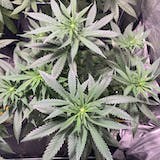 Not much success with progation with these seeds.( 1 in 5 ) 3 sunk right of the go in a 24hr waterbath, 4th grew a small tail but didnt expand far past that, the 5th is a strong seedling though. So may switch back to my previous seed vendor for the MKU. Purchase the MKU along with the Bruce Banner strain and on a positive note all 5 propagated and are already filling out in 4" hydro cells. Appears they will be live up to their name sake. The Cocolope seedlings also are a strong strain 3/3, a 2/5 ratio for the Girls Scout Cookie. A little lower ratio to my norm of 90-95% propagation ratio over all. Will have to see how all the strains will developed over the next month or so.

I have received and planted my seeds. All 3 came up. Why don’t you hit me up on 8-10 weeks when it is supposed to be ready so I can properly review.,,

excellent service. fast turnaround. i am looking forward to getting these started! thank you.